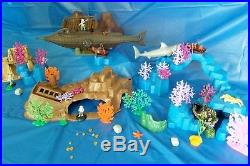 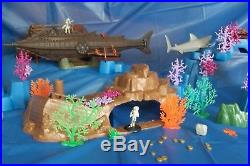 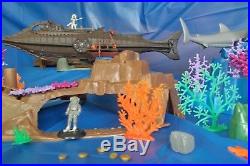 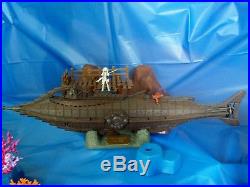 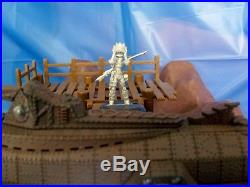 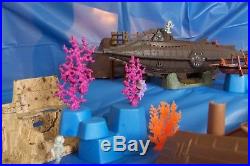 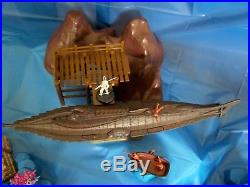 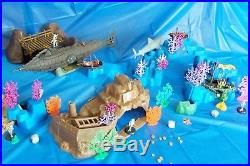 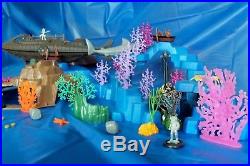 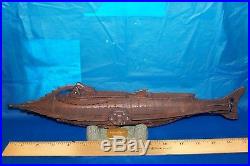 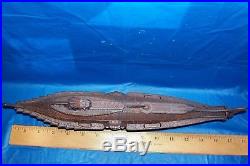 WALT DISNEY 20,000 LEAGUES UNDER THE SEA. This comes with the Walt Disney Nautilus 20,000 Leagues submarine model which is 15 in length. Made by X-PLUS (including base) detailed exterior this is a Limited production, fully assembled and painted for display with sea terrain base.

This is a large set and comes in two separate decorated boxes. This set includes the following. WALT DISNEY 20,000 LEAGUES UNDER THE SEA NAUTILUS SUBMARINE. Dock with flexible gangplank with Land mass (behind dock).

Underwater Egyptian underwater Temple (for exploring). Large amount of blue corral rocks that can be easily rearranged. Two rowboats with oars and men. Underwater plants of different colors (many).

What you see in the pictures is what you get. This is a concept playsets, one of a kind; and made from vintage and reissued pieces from many other manufactures. This set you can build on, by adding other pieces.

This set was never made by any toy company. I hope you enjoy the set as much as I had creating it.

Please review pictures to see what is include. The item "WALT DISNEY'S 20,000 LEAGUES UNDER THE SEA With 15 NAUTILUS SUBMARINE, Play Set" is in sale since Monday, January 01, 2018.

This item is in the category "Toys & Hobbies\Vintage & Antique Toys\Play Sets". The seller is "prosner" and is located in Atlanta, Georgia. This item can be shipped to United States.