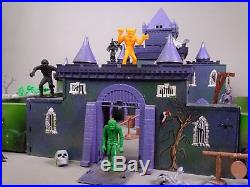 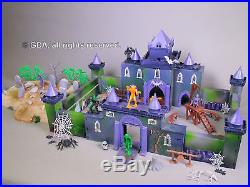 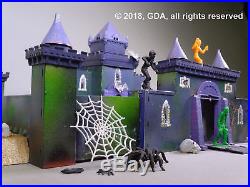 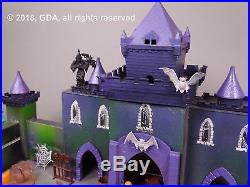 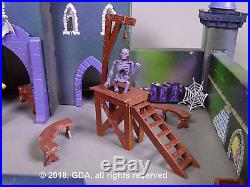 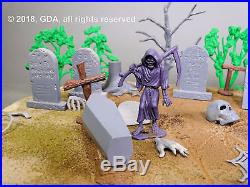 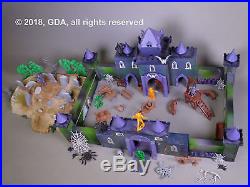 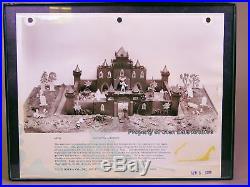 Presented here for your serious consideration A one-of-a-kind engineering PROTOTYPE made in late 1964, or early'65, by Louis Marx and Company -- over 53 years ago!! Toy companies have always been on the look out for the Next Big Thing, and during the early half of the Sixties, Marx Toys, and its competitors were catching' monster fever. Aurora launched a series of very successful model kits portraying the classic Universal Monsters of cinema's Golden Age; Multiple Products was making "Weird Monsters" figures, that kids could collect several ways, including bagged with their snack chips, and Marx created a group of 6-inch tall, injection molded poly plastic renditions of most of the Universal Monsters, in brash solid colors, that could be painted, or simply displayed on the shelf.

However, toy maker Louis Marx didn't create the largest toy company in the world, during the 1950s, by jumping into things without a plan, so the first step would be to create a VISUAL for their concept -- something that could be shown to the major retail buyers that would generate interest, and most importantly, pre-sales commitments! So, the New York headquarters rang up the'Model Room' at their Glen Dale, West Virginia factory -- where the set would be produced, if given the'go ahead' -- and said, "make us a monster set". This is the result of that initial process -. Set #4785, the "MONSTER MANSION" -. Billed as "The weirdest combination of lithographed steel and molded plastic yet devised by the Marx model men" This is the ACTUAL SET, the actual pieces that were put together by the Glen Dale engineering department to create a pre-production advertising'one sheet' photo for Sales. They proposed to use the Marx "high walled" castle as the set's base (a rarity for collectors, today), and as they were not yet given a budget to work with, they used the next best thing: Components that could be sourced from their competitor's already-existing products, such as choice pieces from Aurora monster model kits, like skulls, bats, spiders, dis-embodied hands, and gravestones, and what better for their monster stars than the MPC Weird Monsters. The'Model Room' guys added to these with one-of-a-kind, hand-made, scratch-built pieces, turning some of their own existing Marx pieces into old broken up table and chairs, and a ghoulish gallows. According to the original sales sheet, "the steel'mansion' with its surrounding lithographed metal wall and mansion proper measured 23-1/4" long. 13-1/2" deep and 12" high. Lithographed in a ghostly midnight blue, the set has over 50 pieces. Overall, the set shows vibrant colors, and no major signs of wear. As it is a one-of-a-kind work, made by hand, there may be slight imperfections, such as chips and scratches on the paint work, and some of the original wall sections were not selected so that they'd fit together as they would were this a production example. The graveyard section is a styrofoam add-on that was crafted for a magazine article that appeared in September 2003 (Playset Magazine, issue 11; pgs 16-22). The original Marx sales photo is included with this sale, as well.

Please note that the image, on photographic paper, is affixed to the glass of the frame -- it might be removable by a paper conservator, or by someone with photographic developing skills, but you will receive, as is, inside the black plastic frame. This is the first time since the Marx Glen Dale factory was liquidated, in 1982, that this item has been available to the public.

The set was put on display at the Marx Toy Museum, in Moundsville, West Virginia, where it has been until now. Don't miss this rare opportunity to own a piece of MONSTER TOY HISTORY! The item "Marx Toys MONSTER MANSION Prototype Castle Playset 1965 Never Produced" is in sale since Friday, March 30, 2018. This item is in the category "Toys & Hobbies\Robots, Monsters & Space Toys\Monsters\Other Monster Toys".com" and is located in Pittsburgh, Pennsylvania. This item can be shipped worldwide.