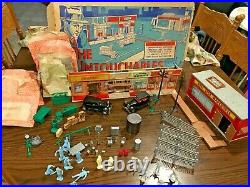 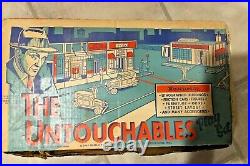 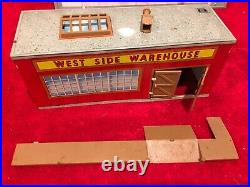 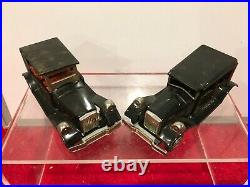 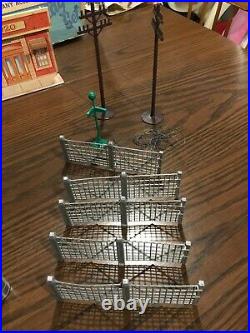 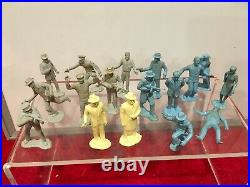 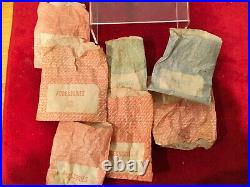 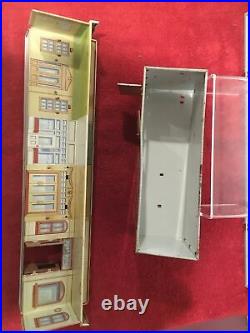 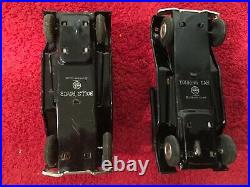 Offered is a Louis Marx & Co. #4676 The Untouchables Playset from 1961 this is not a reproduction. This playset has lots of pieces to complete a set and contains some of the hard-to-find pieces including the both Federal Building Door Lamps, Theater Awning and the Telephone Wire. Is in fair condition with good graphics, some general age wear, and a fraying of cardboard at edges.

It looks like it may have gotten damp or wet or maybe from age the bottom of the box is a bit ripplies. Playset includes 7 bags, still in fair condition.

All of these figures are in good condition some have some discolorations some the blues one have some brown on them and gray ones do also. Al Capone character figure & Eliot Ness Marked on bottom.

Both tin cars are in fair condition no sure if they are suppose to pull back and drive The Rolls Royce makes noise when you push it forwards or backwards, the touring car does also but the back wheels move side to side a bit. West Side Warehouse has both front doors and tabs are intact, the brown vent at the top, the awning on the side and all other tabs look intact a few tiny rust spots and the chimney has one tab broke off also has the walkway piece that goes underneath looks to be all intact. The Streetfront is in very good condition.

One tab is broken on the awning the small on on the right side but other pieces are all there, Both lamps and awning are around the federal building and bank doors open all other tabs are complete. 2 Brown Telephone Poles look to be complete plus I think telephone wire-rope. 5 gray wire look fences looks to be complete. All Green office chair, green lamp post, bank teller window? Office desk, counter with cash register, green barrel, road closed sign with 2 gray legs, file cabinet, feed bag?

Green broken with mailbox and another light post that may go with it (2 pieces). Gray Safe, looks like a wagon with wheels low to the ground, gray barrel, coat rack, fire hydrant, small chair rounded back, lantern, suitcase, office chair swivel look, 3 boxes uprights they have something on the top looks like handle gas cans I think, 1 small gray box with hole in bottom? 1 hand gun pistol gray.

Gray Table with food on 1 leg is broken. Gray small chair 2 legs are broken. 1 large vat for beer dark brown. Please wait for an invoice as I will recalculate after purch.

Please ask questions or more pictures and I will try to answer as soon as possible. THis is information I found from another collector on this set. Marx first issued its 54mm scale Untouchables Playsets in 1961, appearing in both the Sears and Wards catalogs of that year.

The sets were numbered #4675 and #4676, but the contents seem to have been exactly or almost identical. This set, of course, was one of several that Marx based on popular television programs, relying on the program itself to provide sufficient marketing to sell the set. The playset box even featured a picture of the program's star, Robert Stack. The set itself had two character figures, one of Eliot Ness (again in the likeness of Stack) and Al Capone, both in cream.

The Untouchables television program debuted in the Fall of 1959 and ran for four years. Besides the character figures, the set included six "good guys", ten "bad guys", and two innocent civilians.

The figures came in either blue or gray, with sets having the "good guys" and civilians in one of the two colors and the "bad guys" in the other color. The good guys included policemen and Federal agents, and the bad guys varied from a stereotype tommy gun shooter to a gun moll. The civilians are a truck driver with his hands up and a guy lying on the ground, apparently dead. All are nicely detailed and imaginative.

The set came with two tin litho buildings and a variety of small accessories, including two tin litho gangster-era friction cars. While some of the accessories were borrowed or copied from previous playsets (such as fencing and telephone poles), several were made specifically for this set and never used in any other. The tin buildings used the same metal stamping as those in some other sets, but had all-new lithography.

As it seems to have often happened, due to planning time required to get a playset on the market, Marx was late in getting its Untouchable playsets to the public. Playset Magazine Issue 29 features the sets and notes that the company didn't release'The Untouchables' until around the time complaints against the show were mounting.

By the following year, the show had dropped to number 41 in the TV ratings and went off the air the next year. Yeah, but I bet a lot of kids were glad to have it, TV show or no. However, this must have shortened playset production, and it is a hard set to find today. The item "Marx The Untouchables Vintage 4676 Playset 1961 Eliot Ness Lithograph Building" is in sale since Tuesday, December 14, 2021. This item is in the category "Toys & Hobbies\Vintage & Antique Toys\Play Sets".