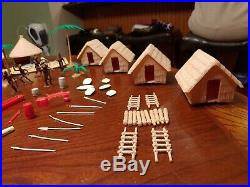 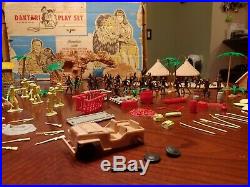 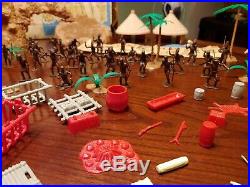 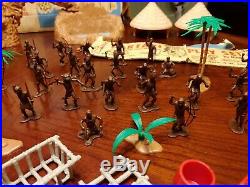 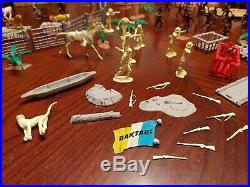 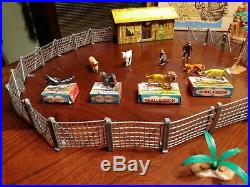 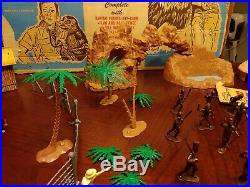 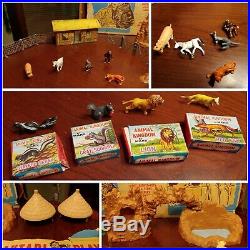 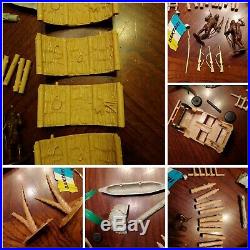 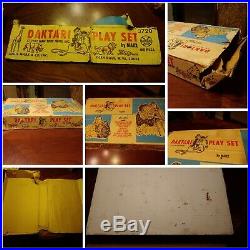 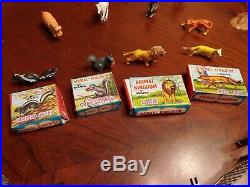 Daktari Playset #3720 INCOMPLETE in Original Box (Louis Marx and Company, 1967). This is an incomplete set. Parts and accessories are missing. There is damage to the box along with some of the included accessories and parts!

This fantastic playset, one of the Marx line of highly detailed playsets made from the 1950s until the 1970s, is based on a popular television show set in Africa, starring Marshall Thompson and Cheryl Miller. Both stars are pictured on the lid of the box. The Daktari playset was issued in three versions, and #3720 was likely the largest and most elaborate. The playset is in the original illustrated box. The box is incomplete, as one of the exterior flaps is missing and the other fell off but is included in this listing.

In addition, there are tears, missing areas of litho, staining, folds and creases present along with some holes. The playmat that served as the base for the playset is missing along with the instructions. Metal lithographed Jungle Trading Post components: walls, 4" x 14.75"; roof, 5.125" x 8.5". There are some dents and bends in the metal.

The roof still attaches as it should. Two of the three double trees have broken off tops. One of the leaves of one of the plants is damaged. The twenty seven African natives in dark brown plastic each measure 1.5" to 2.625" in height.

Two of them have damaged bows. The doctor is missing his head. I can only assume he was captured by the Indians at some point and decapitated. The jeep in tan plastic measures 1.25" x 3.75" x 1.875. Unfortunately one of the axles is broken as the wheels came off each end.

Fortunately, the pieces still exist and are included in the set. Three rifle straps appear to be broken and one spear is damaged on its tip. Each of the tin fence sections are 2" x 5.5". Of the four African Native Huts in tan plastic, 3 huts have one nub broken off on the bottom and one has three nubs broken off on the bottom. Each hut is roughly 3" x 3.5" x 3.5 assembled.

Of the two African Native circular buildings in tan plastic, three walls are each missing a nub. Has both of its nubs. Each building measures 5" in diameter x 4" high assembled. The six ladders are 2.5 in length.

Of the ten supports for huts, six are missing their nubs. Each is 1.75 in height. The metal "Daktari" flag is missing its pole and base.

Of the nine hand-painted plastic African animals, four have their original box! Not sure if all or any of the animals are original to this set. There is only one small square plastic connector that hooks the mountain and lake pieces together. There are accessories that are missing and damage to some of the pieces and parts that are included!