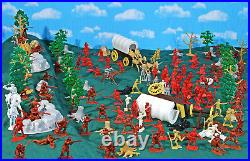 French and Indian War Playset #2. 185 pieces - 54mm plastic toy soldiers and accessories. (contents may vary slightly depending on availability). The British and their Colonial Allies were unable to hold out when the French and their Eastern Woodland Indian Allies besieged their fort.

Offered honorable terms of surrender by the French, the defenders choose to abandon the fort and march back to their territory. But as they pass through a heavily wooded valley, they are attacked from both flanks by a well-organized force of the French-allied Eastern Woodland Indians. Firing from cover and charging into the packed mass of the retreating British and their American colonial militia, the situation is dire. Will the Iroquois, Ottawa and Abenaki tribesmen prevail, or can the British fight them off? This playset includes best-quality unpainted 54mm plastic toy soldiers and accessories, as pictured and as described below. Packed in a sturdy playset box. Contents: British and Colonials: 42 British Infantry and Highlanders (in red color by Timpo, Accurate and BMC) 28 American Colonials, Frontiersmen and Civilians (in tan, cream and green colors by Marx Recasts).

Please message us if you have any concerns. We have a strict policy, in accordance with U. The item "French and Indian War'Forest Ambush' Playset #2 54mm Plastic Toy Soldiers" is in sale since Sunday, December 13, 2020.