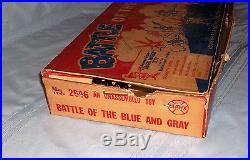 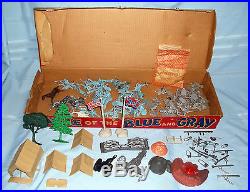 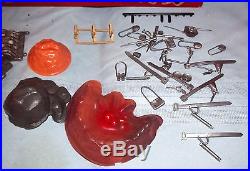 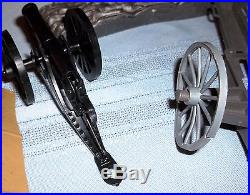 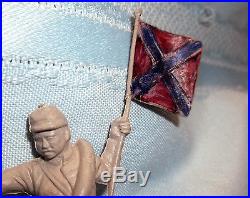 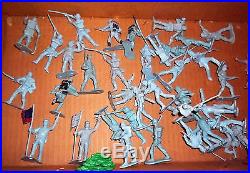 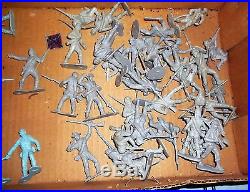 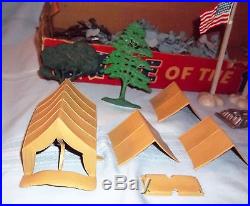 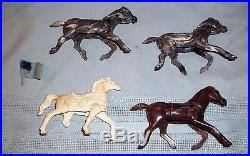 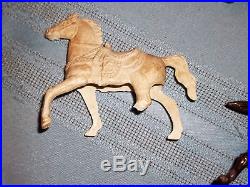 This vintage 1960 Marx Civil War The Battle Of The Blue and Gray play set No. 2646 comes in the original box, but I don't know how many pieces may be missing (or if all the pieces included belong with the set). As it is, the set includes: 2 tin lithographed flags w/flag poles & bases, 2 cannons (the gray one has broken wheels and a broken barrel-I'm not sure if the black one is working or not-photos 5 & 6), one section of stone wall, 2 trees, 1 large tent, 3 small tents, 1 stretcher?

, 1 plastic rock, 2 thin plastic/celluloid rocks (one is cracked-photo #4), 4 horses (one has a broken leg-last photo), 37 Union soldiers, 34 Confederate soldiers, an assortment of accessories, and the paper bag for the accessories. The soldiers that came with bases, all still have them (some soldiers are lying prone or kneeling and don't have bases). However, a few of the soldiers are missing hands and some of the rifle barrels are broken.

Also, the flag staff of a Rebel flag is partially broken (photo #7). A few of the soldiers (and the flags they're carrying) have been colored with what appears to be marker.

In addition to some shoes & backpacks being colored, some of the soldiers have been colored with red bullet wounds. " The 9 1/4" wide x 26 1/4" long x 3" thick cardboard box is intact with no repairs, but it is age discolored with some edge & corner wear and small tears.

In part, the box is marked: BATTLE OF THE BLUE AND GRAY-LOUIS MARX CO. NEW YORK 10, NEW YORK-ANOTHER GREAT "MAGIC MARXIE" TOY from the World's Largest Toy Maker. Some of the pieces are dirty (especially the soldiers), so they can use a cleaning. If you're ever in NW Connecticut, stop by my shop A STEP BACK IN TIME at 458 Main St. The item "1960 MARX CIVIL WAR THE BATTLE OF THE BLUE AND GRAY PLAY SET No.

2646 IN BOX" is in sale since Saturday, June 04, 2016. This item is in the category "Toys & Hobbies\Vintage & Antique Toys\Play Sets". The seller is "stepbackintime09" and is located in Winsted, Connecticut. This item can be shipped worldwide.